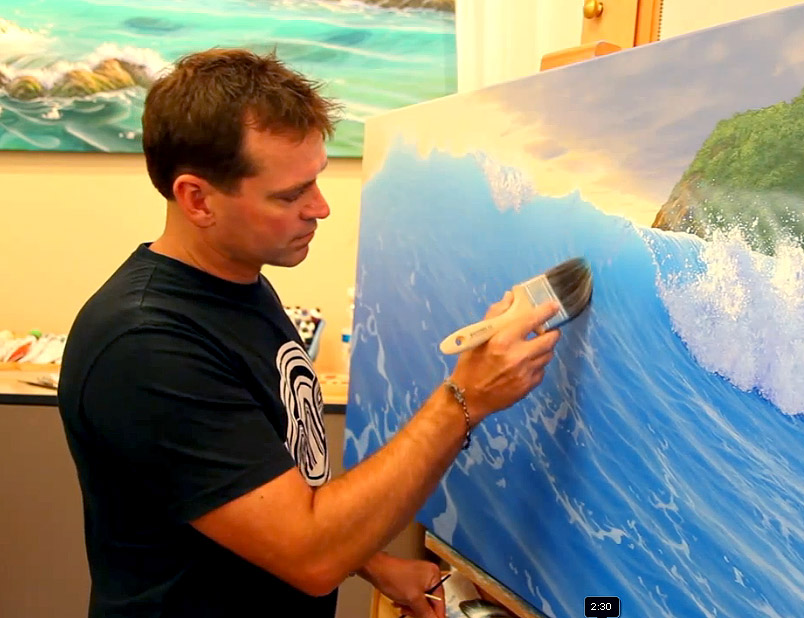 Here we go once again with “random pieces of marketing coolness that I just felt like you needed to know.” There’s no unifying theme, no particular order, and no detailed “how to” prescription. Just a quick 10 minute read that will definitely spark some money-making thoughts in your mind. Have fun!

There’s A Reason Those Artists Are Starving:

My 14-year old niece is a budding artist, and if I don’t say so myself, she’s really good. So when she asked me to take her to a local art festival, “Art In The Square,” on Saturday after lunch, I said, “Let’s go.” The weather was perfect and the place was jam-packed with hundreds of local lookers. As we meandered from booth to booth checking out everything from wicked cool windmills to unbelievable oil paintings, I overheard one of the artists tell someone that he “did 35 of these shows a year and covered 45,000 miles to do it.”

Holy crap. That’s not a weekend hobby. That’s a lifestyle.

And this wasn’t the “starving artist” convention, either. These were professional artists with really good stuff with price tags to prove it. But in the two hours we were there, I only saw one person carrying a purchased painting under their arm, and I didn’t see anyone else who appeared to be in “seriously ready to buy something” mode. It was, it seemed, a festival full of window shoppers, price gawkers, and lookie-loos.

Most of us—take me, for instance—didn’t even know the darn thing was going on until 57 minutes before we showed up. Even though I saw several artists’ work that I found interesting, I simply wasn’t ready to plunk down $450 on an impulse buy.

So did the art show organizers or the artists themselves make it easy for me to find them and sample their wares later?

Of course not! That would make too much sense! Nobody had a card to fill in. Nobody offered a postcard-sized print of their work with a Web address on the back for future browsing. Nobody had a contest for a free print (so that names and email address could be collected). They all simply hoped and prayed that I’d whip out my checkbook on the spot and give them money—essentially on a whim. Talk about under leveraged.

And that wasn’t the worst of it. The festival organizers did no favors for the road-weary artists, either. There was no guide available telling me which artists were where and what they did. There was no list of names. There was no contact information. There was nothing. Even their website only had a listing by names—but no links to artist websites, no way to tell which artist was which. Nothing. Useless. Worthless. Highly disappointing. And extremely under-leveraged. I couldn’t even figure out which artist had the wicked cool windmills to show you. Sorry, their bad. You’ll have to settle for my crummy phone picture.

Major marketing mistake #4 is failure to have an offer. And it is killing these guys. A very simple strategy of postcard-sized prints or even a mini-catalog of their art would allow these guys to build up an email list of (I’m guessing here) 200 to 500 people per show that cared enough about that particular artist’s stuff to fork over their contact information. Multiply that by 35 shows a year and you’re talking 7,000 to 17,500 people on an email list. They could be sent special offers. They could be sent paintings of the week. They could be reminded NEXT YEAR when the art show returned—thereby guaranteeing bigger on-site sales from email recipients who would then be actually anticipating their return… and showing up with that fat wallet, ready and eager to buy.

On the other hand, maybe they really are (truly) starving artists—and prefer to stay that way.

Dentists are notoriously lousy marketers, which probably explains why we get so many of them calling us looking for help. Understandably, they’re always anxious to find as many new patients as possible. And naturally, we’re ready, willing, and able to help them lure in oodles of new teeth into the chair, so to speak.

But new patient generation isn’t where the real money is in dental marketing—it’s in their file cabinets.

I asked a good friend of mine who owns six dental practices in Dallas—he’s NOT a lousy marketer—how many dollars in “unfinished treatment plans” they had on their books. Unfinished treatment plans are simply patients who have been told they need a crown, for instance, but haven’t bothered to come back in to actually get the work done. He told me he knew the dollar figure was significant, but he wasn’t prepared for what he found when he researched the actual amount: $1,700,000. ONE POINT STINKING SEVEN MILLION DOLLARS! Times SIX practices!

So let’s break down the numbers: Assume that 20% of the outstanding treatment plans will be completed over time just due to people finally coming in to get it done. Also assume that 30% of the patients will never complete their treatment plans because, well, they just won’t. That leaves 50% that we might have a shot at IF we employ the right marketing strategy. That’s still $850,000 in business.

So Mr. Dentist, Sir…here’s the magic question: How much money are you willing to spend on marketing to get that $850,000? Most dentists won’t and don’t spend any—unless you count the flimsy, semi-occasional phone calling done by Linda the 3rd string receptionist. Most of them just sit there and wait and hope that people will come back and accrue a massive book of unsold business. File cabinet millionaires.

I asked my friend how many patients the $1.7 million represented. At an average of $1,600 per unfinished treatment plans, there were right around 1,050 patients in that file cabinet. My proposal? Send each of them an oversized 6” x 11” postcard, ONCE A WEEK FOR THE REST OF FOREVER until they finally came in. At roughly 50 cents per delivered postcard, we’re talking about $525 a week, $2,100 a month, and approximately $50,000 for a year.

Take a look at your business and find areas BESIDES NEW CUSTOMER ACQUISITION that might be worth pursuing with your marketing budget. Chances are excellent there’s a big, fat apple on a low branch of the tree just begging to be picked. We’ll explore some of them in an upcoming article. For now—think about it!

Truth, Justice, and The American Way:

Want to learn an easy little trick to make your marketing more potent, powerful, and persuasive?  Hint:  I just used it in that first sentence—did you notice it? And no, I’m not talking about the alliterative use of the letter ‘p’.  I also used it in the header for this segment. It’s a grammatical device known as a ‘tricolon;’ also sometimes known as the “Rule of Three.”

A tricolon (pl. tricola) is a writing device with three clearly defined parts of (usually) equal length, usually independent clauses and of increasing power. They allow you to express your points more completely, empathize your points better, and increase the memorability of your message. Oops, I did it again.

You don’t have to look very far in history and popular culture to find tricola; they’re practically everywhere:

• The Father, the Son, and the Holy Ghost

• Stop, drop, and roll. (I actually used this at age 12 after a severe case of bad judgment with a gasoline can and a lighter. Trust me, it works.)

I went back to some recent newsletters and found these examples:

• “Suburbans, he went on to hyperbolize, have bad crash ratings; they flip over, catch on fire, and on occasion—he let it slip—they even behead passengers.”

Why does the rule of three work so well? The honest answer is I don’t know. But work it does. There’s something about three things that makes your communication more powerful. It hammers your point more forcefully. It drives the impression deeper into the brain. See, another one.

So what about you? Need some pep in your writing step? Then find a way to inject some tricolon action into your ads, brochures, and websites. Feature one in a headline. Drop one in a bullet list. Work one into the text of the ad. You’ll find that your writing feels more powerful, complete, and compelling.

While on vacation to Southern California recently I was inundated with 1-800 GET-THIN billboards at every turn on every freeway. Unlike Wall Drug, who made the million-billboards-in-50-miles strategy famous, these billboards promoting Lap Band weight loss surgery were all identical, featuring a standard-issue California blonde raising her fist in triumph as she weighs 122 pounds on a doctor’s scale. The billboard is straightforward, to the point, and most importantly, EVERYWHERE—there were several occasions where I could see two of them at the same time.

If I had to guess, I’d say that I saw at least 50 of them… and I was only on the LA freeways for less than two hours (the rest of the time was spent in billboard-free San Diego). There could easily be 100 or more of them scattered hither and yon.  I also don’t know how much all those billboards cost; but given the fact that they were in Los Angeles, I’m guessing they weren’t cheap.

If you call 1-800-GET-THIN you’ll reach a call center for Weight Loss Centers, which is part of a Beverly Hills medical partnership called TopSurgeons. According to their website, they have 11 locations. The procedure reportedly costs about $18,000, and according to the guy who answered when I called, lots of insurance programs cover it. So let’s break down some numbers: Assume that their billboard campaign nets them 20 new patients per month per location on average, that’s 220 sales, or just a shade south of $4,000,000 in fat people’s money. Given the fact that there are about a trillion people in Los Angeles, that doesn’t seem too farfetched. If they were willing to allocate 10% of sales to pay for advertising, that’s $400,000—probably enough to buy up all those billboards. Pretty smart, huh?

To make this work in your world, you don’t have to put up $400,000 a month for billboards. Just make sure that you laser focus your message to your target market and then pound the living daylights out of them. The message, when delivered in such high doses, is literally inescapable.  And in marketing, inescapable is a good thing. Viva Wall Drug!